Add to cart Add to cart
Previous Next
ABOUT THE SOFTWARE Laplink PCmover Express 10 is a quick and easy way to transfer from one Windows PC to another, saving you hours or days of time. PCmover's advanced selectivity features lets you choose which Windows settings, documents and files to take with you when you migrate to your new PC. PCmover Express version is ideal for someone with only one user profile on a PC, transferring it with all of its settings, files, and users to a newer PC.

PCmover Express 10 automatically transfers your old Windows files, users, and personalized settings from your old Windows PC to your new Windows 10 PC, saving hours of time and difficulty when setting up a new PC.

Simply install PCmover on both your old and new Windows computers and start the transfer. PCmover will determine which files, users, and settings need to be moved, and when the transfer is complete, your new computer will have the personality and functionality of your old PC without anything being overwritten. PCmover works with almost any Windows operating system, from Windows XP to Windows 10.

Easy to Use
PCmover Express makes the process of setting up a new Windows PC simple, using a step-by-step "wizard-like" process. PCmover was built to eliminate the traditional rituals that come with the purchase of a new PC. It offers a ‘hands off’ solution that allows users to recreate their old computer’s personality and functionality on their new PC, while experiencing minimal downtime.

24/7 Transfer Assistance Quickly set up your new Windows device with the help of a certified PC migration expert, over the phone or remotely. Applications transferred to your new Microsoft Windows 10 PC can be accessed by clicking on the application’s “tile” on the Windows Start screen. To access the Start screen from the Desktop, move your mouse to the lower-left corner of the Desktop, and click on the Start icon that appears. Once on the Start screen, scroll to the right to find your applications, which will be listed as individual “tiles”.

Set Up Old PC First
To perform a PCmover transfer, start PCmover on your old PC first. Complete the PCmover screens as directed in the section Old PC > Setting up the Transfer. Then, when instructed to do so by PCmover, start PCmover on the new PC. Complete the screens to prepare your new PC and perform the transfer; beginning with the section New PC > Setting up the Transfer.

Lightning-Fast Transfer
Transfer everything across your network or use an optional Laplink high-speed transfer cable. Stop waiting hours or days with PC setup. The transfer may take quite a while, depending on several factors: the size of the hard drive(s) you are transferring, the amount of data on them, their level of fragmentation, the number and size of files and folders you are transferring, and other factors.

Microsoft’s latest version of Windows has significantly reduced the usefulness of Microsoft Windows Easy Transfer. Previously, Microsoft allowed users to transfer files and settings directly from one Windows PC to another across a network or using an Easy Transfer Cable. Now, in Microsoft Windows 10, users can only transfer data files using only external media, like an external hard drive or USB stick. 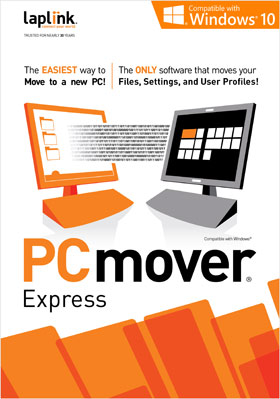